Travelling is a major part of my inspiration as a visual artist and as a writer and I was travelling earlier this year as the Covid-19 crisis was in its early phase. In early February I was undertaking what would turn out to be perhaps my toughest, and certainly my most painful, trek - from Wamena in West Papua (Indonesia) through the mountains to the villages of the Yali people. We were miles from any population centre (or even telephone signal) and had yet to see a facemask. The landscapes were tremendous and varied and the Yali and the Dani (of the Wamena region) cultures interesting: the trip may inspire multiple paintings or prints in addition to the photos I took. However, early blisters deteriorated daily, with a further week to hike, and compensating for the blisters while hiking created new injuries. I had been due to spend another ten days exploring parts of West Papua but the poor shape of my feet convinced me to rest them as much as possible and, having by then switched from tents to hotel rooms, I had access to electricity and a tablet and was able to dedicate hours to writing.

My feet were still bandaged and swollen when I boarded my flight (I am grateful for the [Qatar] airline's changing my seats to give me a chance to raise my feet) but by then the news of the Covid-19 virus had reached the headlines. Indonesia had not yet reported a single case and the country had stopped flights from Wuhan (and perhaps further locations). Connecting to international flights in Bali, we began to see more evidence of the Covid-19 crisis. Asian passengers (especially, it seemed to me, those from East Asia) were wearing facemasks (and sometimes gloves; rarely more than that but some hoods/gowns). Among western passengers these were less evident. The pharmacies I had been to (and I entered several because of my feet) either had no masks for sale or were selling them at prices that reflected their scarcity (an extreme supply/demand imbalance and a lesson in economics). At the airport some young western tourists amused themselves by loudly faking coughs behind travellers wearing face masks.

Looking over at my old work, here is a further image that could be retitled for the current crisis - this 2-plate linocut, "Harar Window / Prisoner's Dream" could be renamed "Lock-down Blues No 2" 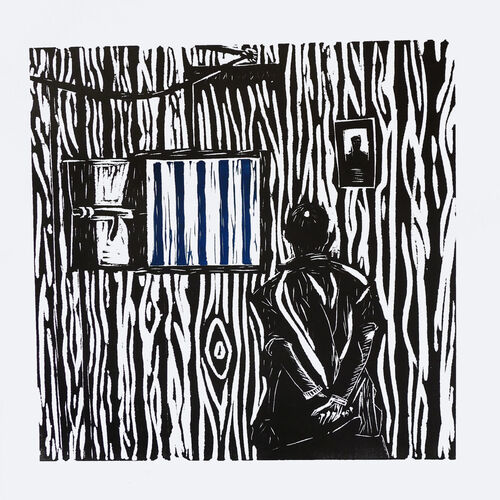