Several days after returning from West Papua, I was due to travel again - but closer to home - to Spain and Croatia, together with a visiting friend. We watched the news daily to determine whether the Covid-19 situation should change our travel plans but fortunately at that time neither destination had reported an outbreak. While we did not see many incidences of people wearing facemasks in open spaces, I did notice a change in behaviour. In London, as we were on a shuttle at the airport, a heavyset, middle-aged man stumbled into the busy shuttle, coughing and sweating, and stood by the door. I was not alone in noticing and the expressions on some faces were accentuated when the man sat on the floor. At first he had simply disappeared from view, hidden by the travellers standing around him, and we wondered whether he might have fainted, but I changed position and looked past the travellers and saw him sitting upright. Not one passenger said anything. When the shuttle reached its destination, the man was already standing and he charged towards the escalators lugging what appeared to be heavy cases, and would now doubt have reached his gate once again puffing and sweating. A passenger simply late for a flight, I assume, but I felt a sense of shame at not speaking to him and I recognised that we were perhaps all beginning to react with anxiety to this mysterious and apparently highly dangerous virus. There were already more facemasks in evidence at the airports than when I had arrived in London a week earlier, but protection was still in a very distinct minority.

My friend and I were both due to visit our respective parents after this trip and while we both felt well, we were nervous after all our public transport - buses, trains, and of course planes - in particular as, flying back to London, we encountered another coughing, sweating man and he was seated next to us on the airplane. I was due to travel to see my parents - a journey that would involve four major train stations - and was uncomfortable about the risk of being or becoming infected on the journey before seeing them. At that time - given my age - I was not concerend about the risk to me as we believed that the worst that could happen to me directly was 'mild symptoms' but the news suggested that even asymptomatic I might be infectious. I chose to defer my travel and also reduced my movements in London. My friend decided on her return to self-isolate at home before visiting her parents. [PS - fortunately neither of us developed any symptoms.].


Looking over at my old work, here is a further image that could be retitled for the current crisis - this painting, "The Cone" could be renamed "Self-Isolation" 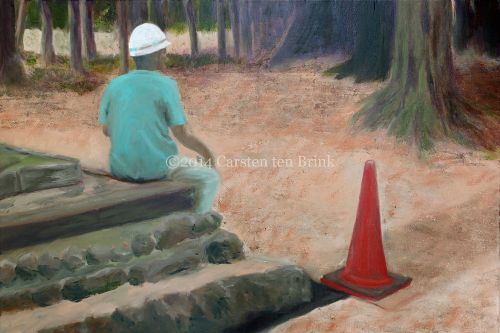