The London lock-down begins formally on 23rd March. When in London my activities depend on my overall travel plans during the academic term: if I am predominantly in London (i.e., for most of the 9-11 weeks that terms usually lasts), then I often book a significant number of activities - from renting/paying for studio/art facilities & courses, to attending other courses/events that interest me (for example to deepen my understanding of African or Latin American current affairs or history) or courses that improve my skills (such as printmaking or photographic techniques). Once I had committed (in 2019) to the Papua expedition in Jan/Feb 2020 and added extra dates to get the greatest benefit from flying such long distances, it was clear that I would be away from London for 3-4 weeks during term time and I had therefore not booked substantial activities, other than fiction and music workshops. Covid-19 affected both - the term's penultimate music class would turn out to be my last physical class - we experimented the following week with an online version and I expect to carry on some form on online training during lockdown. The fiction workshops, where the tutor/facilitator and many of the class members are older, ceased but we agree later to make up some of the lost time with online activities.

The first days of lockdown (including the run up to the official start as guidance had already requested us to change our behaviour) were a strange time and experience, I suspect for everyone. Having just returned the week before, I had almost no food in my home and was also missing certain other things that I suspected I might want later. The weekend before the lockdown I went into Holland Park, planning on a longer, energetic walk, but the park was uncomfortably crowded and it was not realistic to maintain distances in that environment and I left the park and walked the back streets. One reason to go through the park was that it was the way to reach my nearest artist supplies store and I certainly did not have enough if I wanted to produce a lot of art. I decided to go to the shop on the following Monday - and then an email came announcing that the store would now be closed for the duration. Too late in this case - but I am sure the internet will be willing to provide materials in due course. This is the period of the country's panic buying - where toilet roll, hand sanitiser, antiseptic wipes etc become rare goods - it turns out that I have enough of some things but almost no good cleaning products and I pay far over the odds for a bottle of disinfectant cleaner. More problematic is that the grocery delivery I had organised could not bring milk or bread or a number of other staples and I - like so many Londoners - wander around shops looking for treasure on shelves. It takes me around a week of activity to gather supplies to ensure that I would be able if necessary to self-isolate fully for two weeks - I still have no pasta or rice, and limited bread, but am well supplied with vegetables and fruit and, as a last resort, I order a couple of weeks of nutrition/diet milkshake sachets. When they arrive they are deposited in a cupboard, from where I hope I will never need to extract them.

Term was due to end in late March / early April, so the shutdown did not cause as much disruption to the academic calendar as it could have done: there is a vague hope that perhaps the country will reopen after Easter but as every day passes, it becomes clearer that this is unlikely. I was due to depart for a two-week writing retreat in Shropshire on 31st March - a retreat where I was confident I could be productive - but this too would not take place. Instead I started work on my writing projects at home. More on that in the next post.


Looking over at my old work, here is a further image that could be retitled for the current crisis - this painting, "Eritrean Devotion" could be renamed "Self-Isolation II" 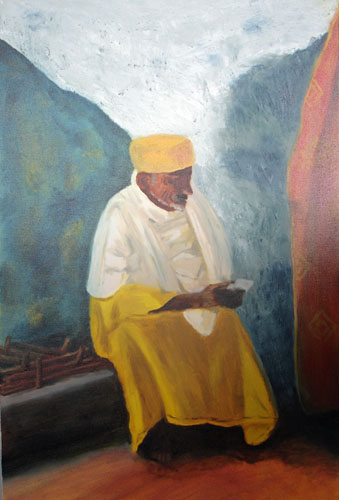