Several years ago I completed a draft novel. Not the first novel I had started - my cupboards and hard drives hold other partial novels, long and short, deferred or abandoned - but it was the first one I'd finished. My experience of earlier novels had shown me that I was one of those writers that did not have all the skills from the first time they sat down at a keyboard. In some areas I could see my own weaknesses - in others I was blind to them. I acquired books about writing and read them; I read blogs and websites and I attended courses. Living in metropolitan London, i would discover that there were courses for all levels of ability and interest. My first course outside London was wth the Arvon Foundation. I enjoyed the residential course but did learn that I was often more engaged by meeting other writers, and learning about them and their projects, than I was about sitting at my desk progressing mine. I returned home highly motivated and confident, with some more skills and I hope better critical judgement, but with fewer sheets of completed text than I had planned. A "win" but the game had turned our to be different from the one I'd envisaged.

Over the following years I worked on several novels (the one I had brought to the Arvon course lies incomplete in a cupboard) and I attended courses on all manner of topics - some very specifically on the craft of writing but others in areas that I thought could help (psychology and drama) or were relevant (South American history). There came a point where I saw diminishing returns in wrting classes - I would be busy producing pieces for a class and reviewing those of other writers, and learning from both, but not actually moving my novel(s) forward in a material way. The tendency was to start every new class with Chapter 1 and take feedback on that, whereas I perhaps should have been spending the week writing chapter 19.

I stopped attending writing classes and concentrated on moving the novel(s) forward instead, And then, when the first novel was completed, I allowed myself once again to look at courses - to edit and later to workshop the outcomes of my editing. Progress was not rapid - I travelled to dozens of countries during those years and completed hundreds of art pieces - and I learned that I could edit sentences, paragraphs and pages well enough, but chapters and entire books required a form of seclusion that my normal life did not provide. And so I returned to Arvon - the organisation has established retreats that were not tutored and did not even require you to spend time with other writers (both of which I enjoy too much and would have been distracted by): Arvon now had a facility where you could just get on with your work. And off I went, to try it.

I returned the following year, for a longer period. Both times I felt my edting was going well and I booked another retreat for last summer - but instead of editing I started an entirely new novel - and produced close to half a zero-th draft in a short time. That novel, set in Peru, I took with me as I travelled there in the subsequent month and the novel grew. I booked another Arvon retreat for this year (thinking perhaps of doing two, a second later in the year) with a plan either to finish the second novel draft or, if I had already done that, to revert to editing the first novel (the books connect and have overlapping characters, which led me to choose to write a draft of the second before completing my edit of the first). And that was where I would have been in the first two weeks of April.

Covid-19 converted my Arvon retreat into a London lockdown. And because I had a project planned, the lockdown was perhaps not as horrific a concept for me as it was for so many others.

I'll write more about my projects in the next post.


Looking over at my old work, here is a further image that could be retitled for the current crisis - this painting, "Yarkand Film" could be renamed "Producing PPE" 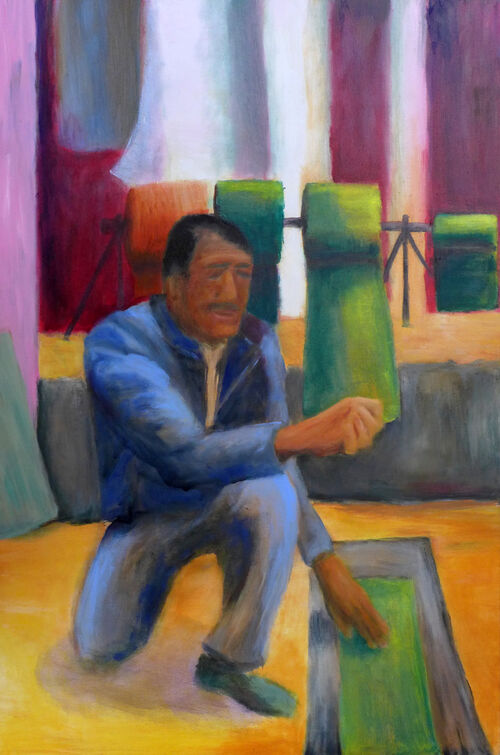